All of the municipalities in the pays d’Evian vallée d’Abondance are labeled Pays d’Art et d’Histoire. This label is awarded to local authorities, which engage in the animation and enhancement of their architecture and heritage.

Before Évian and Thonon, there was Amphion. The discovery of the spring in the 17th century will make Amphion the very first spa resort in the region.

Amphion-Les-Bains thermal baths had its reign of glory between the 17th and 19th century. In the 17th century, the discovery of the spring creates the region’s very first thermal baths.

Many prestigious dignitaries frequent the baths, including Savoy princes and Piedmont-Sardinian kings, who stayed at least 6 times between 1721 and 1780. It is during this period that one particular event will drastically change Publier’s thermal baths.

Count Laizer, an Auvergnat gentleman who was disappointed with the Amphion spring, whilst out for a stroll discovers the famous spring in Évian. The first half of the 19th century subsequently marks the gradual decline of the Amphion thermal baths that are replaced little by little Evian’s thermal baths.

The second half of the 19th century marks the comeback of the Amphion thermal baths when new springs are discovered including the Maxima alkaline spring and the sulphurous Terrier spring, and thanks to Ernest Chéronet, who established a hotel and vast park. To attract more clients he multiplies the attractions with concerts, balls and the famous roulette, he also creates a casino.

The establishment has sitting rooms, reading rooms, bath, and shower rooms. The spa guests use the water to treat nervous conditions, anemia, skin and respiratory infections. Amphion’s thermal baths are talked about far and wide, even in the capitol where posters are hung up with the inscription: Amphion Casino, on the edge of Lake Geneva.

Men of letters meet there, like Grégoire de Brancovan, Anna de Noailles’ father, who spends his summers in the Bassaraba villa.

With Évian’s water recognised for its healing qualities, and the Cachat spring finding public interest in 1926, the Amphion thermal baths are once again left to abandon.

In October 1905, the town was witness to an exciting event when the first aeronautical tests of seaplanes on floats took place at Amphion. At the beginning of the 20th century, Amphion-les-Bains was known for being a holiday destination for the elite and an unusual event would take place there. The 40hp Martini-I cruiser boat helmed by banker Ernest Cuenod, and Gabriel Voisin’s hydroplane, were floating in the port in front of François Celle’s “Excelsior” shipyards. It is here, under the gaze of the local population that the pioneers set off for inaugural tests; that unfortunately failed due to strong winds. Testing would resume a few days later under the watchful eye of Louis Blériot, who later partners to the genius Gabriel Voisin.

During the Second World War, in view of the German advance into the free zone, the Secretary of State for Aviation had a temporary hydro-base fitted out in 1942 for the giant transatlantic seaplanes in order to ensure their safe-keeping near Switzerland and continue testing. A farm was requisitioned and a forest was cleared in order to build airstrips, install hangars and pilot accommodation. Unfortunately, it was requisitioned by the Germans, so these sea giants never reached Amphion, and after the liberation of the hydro-base in Biscarosse, the Amphion base was no longer needed. In 1948, the Civil Aviation set up its first summer camp here and in 2010, the Conservatoire du Littoral acquired the 5 hectares of “Port Pinard” in order to turn it into a reserve.

The Dranse Park (the last remaining park in the municipality, adjoining the Tilleul Park), is an area that was “given back” to nature.

Winner of the French Academy’s Grand Prix for Literature and first female commander of the Legion of Honnor, Anna de Noailles has known immense notoriety in the Parisian literary world, from the Belle Epoque to the beginning of the 1930s. Born Princess Bassaraba de Brancovan, she will spend most of her summers in Amphion up until the Great War, where her family own a vast property: the Bassaraba Villa. Anna de Noailles drew the core of her inspiration from the love she had for the Lake Léman scenery.

On the edge of the lake leaving Publier towards Évian, there is a shrine that has been erected in Anna de Noailles’ honour. 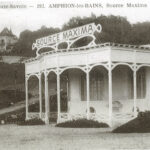 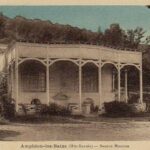 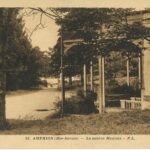 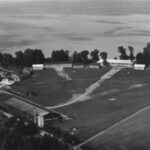 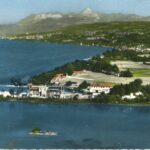 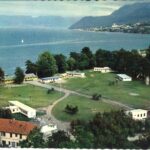 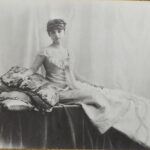 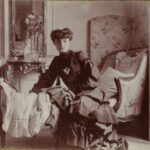 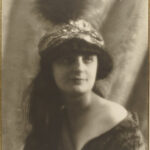 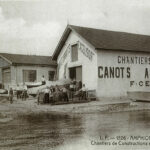